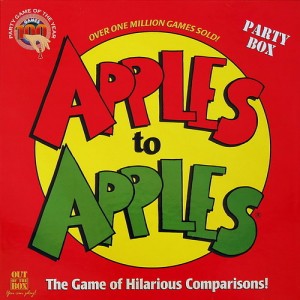 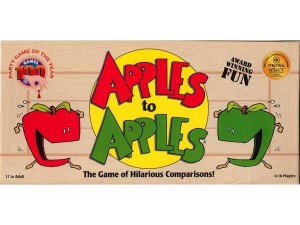 It’s amazing to see Apples to Apples as such a mainstream thing.  I remember when Out of the Box and John Kovalic first released the little party game.  We tried it right about the time it was releasing at a trade show thirteen years ago or so, and was taught the game by one creators.

Apples to Apples is a party game that has been duplicated many times since.  One player, the judge, turns up a green apple card which has an adjective (usually) named on it.  Each other player will try to play one of the seven red apple cards in their hand that they think best (or most amusingly) fits the green card, face down.  The judge will then look at all the cards and decide.  Whoever’s card the judge chooses gets the green apple card as a score marker.  The first player to get X score cards wins.

The game is simple, but the replay ability is quite impressive.  This game comes out at family gatherings quite often, and the results are often hilarious.  We’ve bought copies for friends (including my middle school english teaching mother-in-law).

Seven years into its life, Mattel purchased Apples to Apples from Out of the Box, and it is still a strong party game to this day.  Several games have duplicated the Apples to Apples mechanic, adding their own twist, most recently the Big Bang Therory Party Game and Cards Against Humanity.

If you’re looking for a game that isn’t intimidating for new players, Apples to Apples is a great choice.