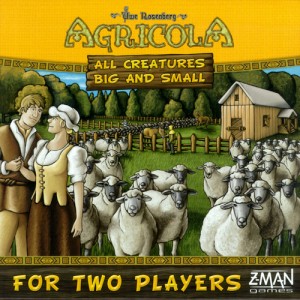 And I’m back from my brief, self-imposed, blogging hiatus.  As noted in my previous post, I’ve now welcomed my daughter into the world, and can once again breathe normally.  This all came up on us pretty quick at the end, as they decided to try to induce her two weeks early.  The idea was, we’d go in on Tuesday night, they’d give her some meds, and let her rest until Wednesday morning.  Then they’d begin the induction.

To that end, I took several small games with us to the hospital, including Agricola: All Creatures Big and Small.  I’d only gotten it a week before, and we hadn’t gotten to play it.  Agricola is one of those games that’s “Been on our list” since 2009.  We’ve just never gotten around to getting it.  So when I was finally able to pick up a copy of this two-player spin off, I was happy to do so.

We didn’t get to play any games on Tuesday night.  There just wasn’t a good place to play anything, so we both amused ourselves with some IOS games, including starting a game of Stone Age that we’ve now been playing off and on for the last two weeks.  Wednesday, the opportunity just never presented itself.  The induction quickly turned into an emergency Cesarean Section, so I’ve been officially a parent since 12:21 that day.

Needless to say, the last two weeks have been a bit of a whirlwind.  We came home on Friday, and went through a few minor tribulations (minor unless you’re a first time parent).

*ahem* Sorry about that… 275 words in, and I’ve barely talked about the game at hand.  We finally got to play Agricola: All Creatures Big and Small last night.   The game went well, despite a few distractions.  The distractions made it a bit difficult for her to follow the rules, as I tried to explain them while learning them at the same time.

The game takes one of the elements of Agricola, and makes it a game in itself.  In A:ACBaS you are building a farm to contain animals.  It, like Agricola, is a worker placement game, where you spend your workers to complete tasks, hopefully before your opponent takes the actions that you want to take that turn.  The general goal is to fence in pastures and build stables to hold as many animals of four different kinds you can, over eight turns.

It may have just been the distractions we were having, but I feel the rulebook kind of starts in the wrong place.  It starts out telling you how to fence in the animals, before it tells you how you even get the fences.  Again, I need to look through it again, to get a feel for how concise it is.

Like most first games, where nobody has played it before, it was a little rocky, with us both taking actions that didn’t really benefit us, and building a few fences that ended up not making sense.  Despite that, by the 4th turn, we had a pretty good handle on what we were doing, and enjoyed it quite a bit.

The games has 4 types of animal, 3 types of construction resources. As each turn progresses, you add these animals and resources to the game board.  As your workers take various positions, you claim those animals and/or resources.  You can also take actions to build fences and buildings, provided you’ve collected the resources to do so.  The larger the pasture you’ve built with those fences, the more animals you can hold.  At the end of each turn, if you have enough of each type animal (2), they breed, giving you an extra animal.

After eight turns (signified by running out of extra fences in the supply, a simple mechanism that I really like), the game ends, and you total your points. You get bonuses for having large herds, lose points for not diversifying, and also get points for the buildings you have built, as well.

Even with the learning curve, we completed the game in about 40 minutes, and enjoyed it quite a bit.  I won, by about 4 points, but we missed one of the details of scoring bonus points for animals, so really, it could have been anyone’s game.

I’m a big fan of worker placement, but I feel it can be a tricky beast at 2 players.  It’s hard to limit the actions available in a game made for 4 players, with only 2 people playing.    This game, being designed for 2 players, seems to hit that contention fairly well.  There are two ways to get stone, and two ways to get wood, but one is notably better than the other.  There are more actions available on the board than there are total workers, so some unused actions will build up as turns progress.  This may not sound very limiting, but several of the actions will gain you animals, and if you don’t have a completed pasture built for those animals, they’ll just “run away”, leaving you with a wasted worker.

We enjoyed this, and look forward to playing it again, now that we have a better understanding of what we’re doing from the start.  I will add comments to this post as we get more plays, with any additional thoughts.