As I mentioned before, as I add games to my collection, if they’re alphabetically before my current place in my list, I will jump back to include them.  This is the first of two such additions, before I get back into place. 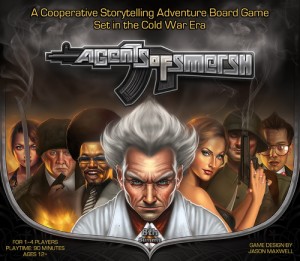 I played Agents of SMERSH twice before buying it.  Travis (who posts the wonderful After Action Reports here) had picked up a copy, and we got to try this a couple of times before I moved away from that group.

In Agents of SMERSH, you play a U.N. “SuperSpy” trying to shut down Dr. Lobo before he does something to destroy the planet, or something to that effect.  You travel the globe and have semi-random encounters (based on your location, reaction, the state of the board, and a random element).  You’re given a scenario, and a test to perform (By rolling specialized dice equal to your rating in the skill to be tested).  If you succeed good things (usually) happen, and if you fail, Dr. Lobo gets closer to his goal.

I’ve played this game 3 times, with 4 players each time, and I’ve not succeeded yet.  That doesn’t mean I don’t enjoy it immensely.  I love the “Choose your own adventure” flavor of it, especially with the adventure book that (optionally) comes with the game.

The path to victory includes facing some heavy hitting “Lieutenants” several times, while collecting intelligence tokens with random symbols on the unrevealed underside.  Once you’ve defeated the lieutenants a number of times (5 in a 4 player game), you may reveal the intel, and if you have collected all the symbols that match the symbols on the current “threat” level, you win.  Else, you lose, and Dr. Lobo unleashes his own version of the apocalypse.

I’ve played this with both gamers and non-gamers alike, and have enjoyed it, though I’m not entirely sure the non-gamers were as thrilled with it as I was.  They said they had fun, and I think I can get it to the table again, but I hope we can win it soon, or I fear they’ll give up on it.

In that play, by the way, I streamlined things a tiny bit, by acting as “GM”, and read the adventures for each player except myself, so as not to have to pass the awkward spiral bound book around the table too much.