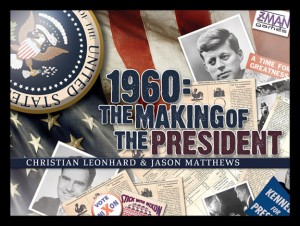 Shortly after the 2012 election, I had apparently not had enough of the election fervor. I picked up a copy of [bgt id=27708], and got to play it within a few days.

Since I’ve started following several board game podcasts (The Dice Tower, Ludology and On Board Games, specifically), [bgt id=12333] has been on my radar, but I couldn’t quite justify the expense, as I wasn’t sure I had someone to play it with. I learned that 1960 was out of print, and remembered that my FLGS still had one, so I pulled the trigger on it, reasoning that I wouldn’t have another opportunity.

The first thing I noticed was the production quality. This is a downright beautiful game. I’ve found Z-man games to be hit and miss, but this one is incredible. The board is large and sturdy, with one side for the Nixon player and one for the Kennedy player. A large bag for red and blue cubes represents the balance of political clout. Heavy cardboard tokens and a sizable deck of event cards round out the components. Overall a wonderfully put together game.

Within a few days of purchase, Jeff and I got the opportunity to play it. Jeff took on the role of Nixon’s campaign, and I took on the Kennedy side. The game plays over 10 rounds, each representing several weeks during the political campaign. Cards that you draw and play throughout the game will let you add cubes of your color to the bag. Cards are usually beneficial for you or your opponent, and you have the choice of playing them for their event, or as a simple political campaigning tool. However, if you play them for campaigning, your opponent may use them for their event, which may benefit them. Taking charge of issues and the regional media will also affect the balance of power in the states. It was a close race, but Nixon was able to secure the media influence and the East Coast, and managed to win the election. It was a great game, and took about 2 hours to play.

I have yet to play Twilight Struggle, but I understand that this mechanic is similar for both games. We enjoyed it enough that it will certainly make it to the table again, but only after we’ve tried it’s bigger brother, Twilight Struggle, which I picked up for Jeff for Christmas.

I hope this makes it back in print, as I think it’s a fascinating election to follow, the theme is really well tied to the game, and the gameplay makes a lot of sense.

This is my first review in this series. Thank you for bearing with me, as I’m sure I’m not the easiest person to follow, but I’m hoping the practice of doing this will help my writing skills.