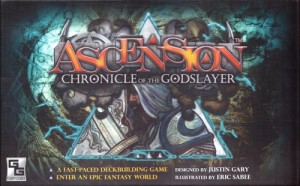 I’m going to  change up my format for these entries.  I’m going to give a brief overview of the game in my own words, followed with my thoughts and play experiences.

Overview:  Ascension is a deck building game.  You start the game with two different types of resources in your deck, with a random assortment of these forming your hand.  An assortment of cards are at the center of the play area, that you may purchase with these resources.  As you buy cards with those resources, they’re added to your discard pile.  Once you run out of cards, the discard pile gets shuffled, and you have a new deck.  That’s the standard deck building game definition, more or less.

In games like Dominion, there are a number of piles in the center of the table for you to choose from and everyone has access to those piles.  Ascension differs in that there are 6 cards in the center row, and as each of those cards is purchased (or defeated) they are replaced by a new card from a central deck of cards.  There are also different types of cards.  Heroes and Constructs may be purchased with one of your resources and added to your deck, while Monsters must be defeated using the other resource, and give you a one-time benefit for defeating them.  You play until a pool of victory points has been exhausted, which happens as you gain victory from defeating monsters.  The cards you purchase also have a victory value, so there are multiple strategies to consider for victory.

Thoughts:  I was a few months late jumping on board with this one.  I didn’t discover it until attending the Alliance Open House in November 2011.  By then it was already a hit, and hard to get.  I played this a handful of times over the weekend, and have been a fan ever since.   The art isn’t great, though.  Later expansions and standalones have brought better artwork to the mix.

Granted,  I don’t get to play it as often, as it’s not a favorite for Jamie.  Since I’ve started recording my plays, I’ve only played it once, physically.  Digitally is another story.  It’s one of the first games I picked up for the iPhone and iPad, and I’ve played it several times.  It’s a great game to play against the AI, and I’ve played against online opponents a few times.

I enjoy this game, though I think I like the digital implementation better.  I think I’d like to try a live tournament, though.  I’m not a super competitive player, but I think I would enjoy trying my hand at two-headed competitive play.