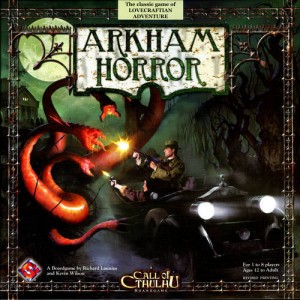 I’ve only had a copy of Arkham Horror for a short time.  Our friend Dave (Morik) has brought his collection over several times, and I’ve joined in games varying anywhere from 4 to 8 players.

I’ve had a few opportunities to play this recently.  A few days after the birth of my daughter, I found I had a little bit of free time, but nobody to play a game with.  I broke out the base Arkham Horror (which is all that I own.  For now, that’s enough) and tried it single player.  I’m beginning to think I would have been better off controlling at least two heroes to play.

I selected my hero randomly, Harvey Walters, and the threat, Yig.  The game went well, and I had a lot of fun.  That’s not to say I survived.  In fact, I was slaughtered rather handily.  I’m using an app to track the encounter cards, as that speeds the game up a lot.  I survived a lot longer than I expected, as everything went wrong rather quickly.

A few days later, three of us got together and played.  Travis documented this play pretty well, and I’ll not repeat him.  We had fun, and we made a few mistakes, but we did triumph.

On Tabletop Day (March 30), Jamie and I got together with a few good friends of ours, and decided to give Arkham Horror a shot.  Our first mistake was trying to start the game so late in the evening.  We never got ahead of the curve, and 6 gates opened, awakening Ithaqua.  We were so tired, we conceded that we could not defeat the elder god, and called it a night.

Last night, however, I got together with Jeff, James, Travis and Robert, and we decided to tackle mighty Cthulhu.  It was a close battle, but a few random bits of luck were on our side, including an environment effect that kept the terror level from rising that stuck around for a while.  We sealed our sixth gate with 3 empty spaces left on Cthulhu’s doom track.

In an only peripherally related note, I haven’t mentioned the Call of Cthulhu LCG in this post.  I don’t own it, but learned it several months ago.  Shane Porter, a newcomer to Legends, brought a copy in and let us borrow it.  Jeff and I played it a handful of times while we had it.

Shane returned several times, and joined us for quick games, frequently before heading to work, and he became a regular friendly face.  We ran into him at GenCon, where he was attending with some (if not all) of his children.

Shane left home on February 8 2013, to go to work, and never arrived.  He has been missing ever since.  His car was found near the river, and I fear the worst.  His situation has been on my mind a lot for the last several days.  Our thoughts are with him and his family, and we hope he returns home safely.