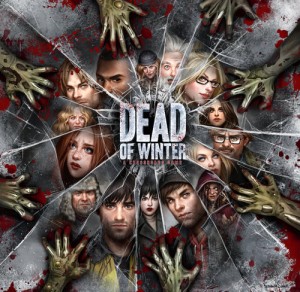 In my last post, I promised to share my thoughts on Dead of Winter. Disclaimer: I spent the weekend of Origins demoing Dead of Winter for Plaid Hat Games, so I may be a bit biased.

Dead of Winter is the first in a series of games from Plaid Hat Games called Crossroads games. It was created by Jon Gilmour and Isaac Vega. In it, you and between one and four other players are survivors who have formed a colony in Alaska, after the zombie apocalypse has occurred. Now, before I go any further, I will say, I’m not a fan of zombie games. They’re just not my favorite thing. That said, Dead of Winter provides a great twist on the theme. Each player controls a number of survivors who will be their “team”. Throughout the course of the game, players may gain or lose members of their team. Each play of the game starts with an overall objective card. This is the main way the game can be won or lost. For example, one of the scenarios has the players collecting samples of the zombies, so the doctor in the colony can try to find a cure for the infection. Additionally, each player has their own secret objective that details how they personally can win the game. Most of the time, the secret object is “The players have completed the main objective, AND _____”. Maybe your objective is to hoard food cards. and you have to end the game with four of them in your hand. Or maybe your goal is have no wound tokens on any of your survivors. There *is* a possibility, that there’s a betrayer in your midst, who wants, for one reason or another, to see the colony fail. They will have a secret objective that details how they can win the game.

The board consists of 7 areas. The colony (main board), the gas station, police station, hospital, grocery store, library and school (location boards). The colony represents the collection of survivors that are in the colony (indicated by 45 spaces or so), the entrances that zombies can threaten (6 of them), the food reserves, the waste pile, turn and morale tracks, and a deck of cards that represents the crises (More on this in a moment). Each location board has its own entrance that zombies can threaten, a number of spaces that survivors can occupy, and a deck of cards that represents the things that can be found when that area is searched.

There are several things you have to worry about each turn of the game. First, you have to make sure there’s enough food in the colony. You play food cards to add food to the supply. Second, you have to make sure that the various entrances aren’t likely to be overrun by zombies at the end of the turn. Third, you have to make sure there’s not too much waste. Cards that are played leave waste behind. A tidy colony is a happy colony, and keeping the waste in check helps keep your morale from dropping. Lastly, you have to worry about the current crisis. Each turn, a crisis will be revealed with a requirement and a penalty. For example, maybe you have to contribute X medicine cards to the crisis, where X is the number of players. Each turn, you can contribute any number of cards from your hand, face down, to the crisis. At the end of the round, those cards will be shuffled and revealed, and if the requirement is met, nothing happens. If not, something bad will happen, probably resulting in a loss of morale. Note that anything OTHER than the required cards counts as a negative card, which is one method that a betrayer could slow down progress. If morale ever drops to zero, the game is over and the colonists have lost (though a betrayer may still win).

You start with a semi-random hand of cards that could be food, medicine, fuel, etc. These supplies will quickly run out, though. You collect the resources you need to preserve the colony by venturing out of the colony and searching for gear and supplies. Every time you travel to a new location (and every time you kill a zombie) you have to roll an exposure die, that could result in a wound (each character can withstand 3), frostbite (A wound that recurs each turn), or even being bitten by a zombie (death and possible spread of infection). When a survivor is bitten, they die. If anyone else is at that location, the survivor with the lowest influence has to make a choice: Sacrifice the survivor, and stop the spread, or roll the die, and repeat the process if anything other than a blank face turns up. As you search each location, you will draw cards from the location’s search deck. If you don’t like what you find, you can “make noise” to search further,but each time you make noise, there’s a chance of more zombies showing up at that location at the end of the round.

Let me take a moment to tell you about action dice. In Dead of Winter, you have action dice for your whole team. And you start each round with a number of action dice equal to the number of survivors you control plus one. You roll these dice at the start of the round, and the results of these dice determine what actions you can take during your turn of the round. Each survivor has stats that tell what number they need (or better) on a die to kill a zombie (combat rating) or search a location (search rating). You may spend these dice with whichever character you want, regardless of how many dice they’ve already spent. Dice can be spent to kill zombies, search locations, build barricades, clean up waste, and more.

This game has a lot of elements that really excite me. It’s a true cooperative/semi-cooperative game, that negates the Alpha Player problem, by giving every person their own special win condition. It has a potential traitor, with a solid traitor mechanic. While the method of contributing cards to the crisis isn’t new, it is wonderfully streamlined. The way that infection spreads is nicely done, by putting the decision into a player’s hand. The theme is very fitting, and the story elements really work well together. But the thing that really sets this game apart for me is the part I haven’t mentioned since the beginning of the article: The Crossroads cards.

Each turn, while you take your turn, the player to your right will be looking at a crossroads card. At the top of that card is some kind of criteria, like “If a survivor searches at the library” or “If the player has a survivor at the colony”. If that criteria is ever met, the player reading the card will stop the game, and read the crossroads card. Many times, the player is presented with a choice that could gain the party a reward at a cost, or the players as a whole will vote on something, and sometimes, something just *happens*. The crossroads cards add a twist to the whole gameplay experience that still manages to be thematic, engaging and fun.

I played this game twice at Origins, and demoed it for 8 hours over the course of the weekend. After I finished, I still wanted to play it again, RIGHT THEN. The game is tense, rarely gets repetitive, and every game I saw was pretty close. Only once did the party seem to have an easy time of it, and even then, a few twists cropped up that made it dicey.

My only concern is the potential for the crossroads cards to become repetitive after several plays, but I honestly don’t think that’s likely to happen, considering that crossroads cards frequently don’t activate.

Dead of Winter can be preordered from Plaid Hat Games, and should (hopefully) be released in July.