Sorry for the delay in posting the rest of my Origins experience. As I mentioned before, immediately after returning from the show, we started moving. While we haven’t finished, I’m making a bit of time to get some words out of me.

Day 2 is when things got busy. I spent the day demoing games for Plaid Hat Games. I admit, I was a bit on the nervous side, for some reason. It’s one thing to demo and teach games, which I do quite a bit. It’s another to do it when you’re worried that the guy that makes the game for a living will think you’re doing a bad job. I had a rocky start with Mice and Mystics, as it’s been a while since I’ve run it with any regularity, though I feel like it went well overall. 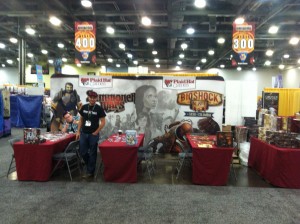 After that, I transferred to the VGHS table. Video Game High School is an upcoming game from Plaid Hat Games, that puts you in the role of characters from the VGHS web series. If you aren’t familiar with it, it’s ok, the game plays well even if you’re not, but I’m looking forward to checking it out myself. Imagine an alternate world, where one of the major sports is playing video games. VGHS is an easy to learn worker placement game, that I’ll undoubtedly be picking up when it releases, hopefully in August. I’ll do a bit of a write up on it later. I learned it, but didn’t get to demo it, as we switched the table to Summoner Wars demos.

Summoner Wars I’m pretty comfortable running, and the rest of the demo day went smoothly. The big hit of the show for Plaid Hat, though, was Dead of Winter. During the day Thursday, many people watched, waiting to get into a demo of it. Since I was scheduled to demo it on Friday, I made arrangements to borrow it Thursday night, and learn/demo it in the Board Room.

I learned a few weeks ago that an old friend, who was a regular at Ginny’s Midwest Comics, was living in Columbus, so I made arrangements to meet up with him, for the first time in around 15 years. He suggested dinner at The Melt, which I hadn’t considered, even though we’d walked past it several times on the way to and from the convention center. Meeting up with an old friend is great, but discovering The Melt was another show highlight for me. A phenomenal menu of signature grilled cheese sandwiches, and 40 beers on tap. I won’t go on and on about The Melt, but I will say I ate there 4 days in a row, 4 different sandwiches, and hand the same beer every time. I’m looking for excuses to take my wife to Columbus sometime soon.

On to the Board Room, where I found a table, and set up Dead of Winter. It didn’t take long to have a table of 5 ready to play, including my housemate Brian, Bill Reed, and none other than Eric “The Voice” Summerer. Dead of Winter is another game that I’m not going to explain in great detail here, other than to say that I played it twice on Thursday, demoed it the following two days, and I am still excited to get my hands on it and play it again as soon as I can. Our first game was a ton of fun, with Eric reading the story setup and some of the crossroads cards for great effect. After two games of Dead of Winter (at 1 to 2 hours each) and 8 hours of demoing, I was pretty beat, and retired to the house for the night. 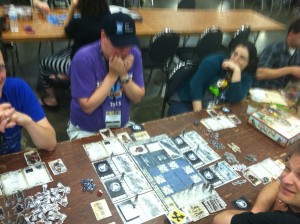 Friday, I spent the first 4 hours of the con demoing Dead of Winter, and I’ve gotta admit, I had a blast with it. Again, I won’t go into great detail about DoW, as I want to do a writeup on it separately. But, when the Kodiak Colby promo crossroads card came up, I summoned Colby himself to read the card for effect. 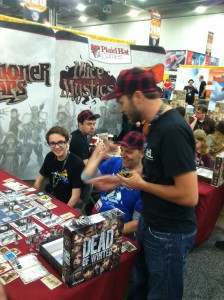 After my stint at the PHG booth on Friday, I stopped by the Steve Jackson booth to get a T-shirt signed by John Kovalic. I worked at a convention in 2000 in Carbondale, IL, where John appeared, and he had designed the shirt for the show. I got it signed back then, and had it expanded upon, 14 years later. I also made arrangements with him to pick up the original for a piece of art I commissioned from him in 2012. Then, I joined 4 of my housemates at The Melt for lunch, as I had to share my find with them. We all had the Left Hand Milk Stout, and an amazing array of sandwiches (Ok, so I lied about not mentioning it again).

After lunch, I wandered the exhibit hall for the first time during regular hours. I was disappointed to not see WotC or Fantasy Flight Games, or several others, but I enjoyed what I did get to see. I ran into a few old friends, and caught up with them briefly.

After a brief trip to the Board Room, I retreated to the Big Bar on 2, to await the Secret Cabal Meetup. I believe I was the first one there, since I showed up 2 hours early. Mostly, I just wanted to start relaxing early. Another observation: Secret Cabal fans are a great group of pretty laid back people. I talked to several people throughout the event, and everyone was just really cool. This is an extension of my observation of my housemates, who were all, to a man, awesome.

Then we retired to the Cabalist House for a few games. Masquerade and Nothing Personal were my games of the evening.

Saturday saw me, once again, spending the early part of the day running Dead of Winter demos. Since this entry is running long, I’ll just say it was fun. I wrapped up my demoing experience with Plaid Hat, and said my goodbyes, and explored the Exhibit Hall again, after learning that the auction had so few items to sell that it ended 4 hours earlier than the estimated running time. Then I went back to the Steve Jackson booth to wait for John to finish his signings. Though I had waited out the line the day before, I wanted to get something for my daughter, even if she’s too young to appreciate it. 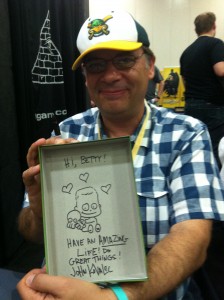 After he finished his signing, he ran to his room to get the artwork, and while he did, I sat at the booth talking to one of the guys from Steve Jackson Games for a while. 15 minutes into the conversation, I found out I was talking to Leonard Balsera, who is the lead developer for Fate Core and the Dresden Files RPGs, both of which I’m really into right now.

I ran into another old friend, whom I don’t think I’ve seen in probably 10 years, and chatted with him and his wife for a bit. By then, it was too late to join anyone for lunch, so I made my way to The Melt alone, for my 3rd such meal in as many days. Then it was off to the Board Room for some more gaming. Played Ascension with a couple of strangers, and then joined a few of my housemates for a The Great Heartland Hauling Company, followed by Rune Wars (Another partial game).

Finally, we wrapped up the evening back at the Cabalist House with several games of One Night Werewolf. The next morning, we saw 3 of our numbers off for their long road trip home, cleaned the house, and vacated our 5 day home-away-from-home, not entirely in that order. The last 4 of us made a final excursion to The Melt for brunch, and prepared to be on our respective ways back home.

All in all, I had a great time. I was a little disappointed in the vendor participation and turnout at the convention, but I enjoyed the company of the people I met, I played some great games, had some great food, and just had a wonderful time of it all. I will definitely return to Origins, but it may be a few years before I can.