A few months ago, my cousin Seth asked me if I’d like to go to Origins. He was toying with the idea of renting a vacation house for a week, rather than springing for a hotel room. I’d never been to Origins, and I’ve wanted to for years. After talking it over with Jamie, I decided to give it a shot.

For the last several months, I’ve been part of Plaid Hat Games’s demo team, and a few weeks before Seth asked, they put the call out for Origins volunteers. I sent in an application email, and was accepted.

Now we had to figure out how to get more people to join us. The vacation house idea only works if there are 7 or 8 people splitting the rent. We asked several local friends, and only one expressed an interest. Seth and I are both regular listeners of the Secret Cabal Gaming Podcast, and he decided to advertise the opportunity to the people in the Secret Cabal BGG Guild. We got our 8th person to join us just a few days before the show. Sadly, one member had to drop out due to family illness, leaving us with a total of 7 attendees.

Over the following several weeks we all planned the games we were going to bring and have available to play away from the convention.

This is the trip that almost didn’t happen. With Origins falling on June 11-15, and our lease being up on the 15th, I was worried that the show might happen right as we were trying to move. As it worked out, we will be moving right AFTER I return from Origins.

Anyway, on to the trip.

Day 0:
We left Columbia City at about 4pm on Tuesday, and arrived in Columbus at 7:30. We met with the owners of the house, a very nice couple who are still converting the house into a full time vacation rental. The house is about a mile from the convention center, but there is a free bus that stops a block away, and goes right to the convention center.

Then we walked down to the convention center, just to get an idea of what the walk was like, and find dinner. John was nearly run over by a surly woman on a bicycle. We found a nice pizza place/deli/bar for dinner. As soon as we walked in, we spotted 4 tables playing Vampire: The Eternal Struggle. Seth and I split a large Lasagna Pizza (yes, Lasagna Pizza).

We returned home in the rain, and prepared for the first day of the convention.

Day 1:
I arrived at the convention center with Seth and John. Plaid Hat hadn’t arrived yet, so I figured I couldn’t get my badge yet. As John and Seth disappeared into the Board Room, I went to the customer service desk to buy my Board Room ribbon. It turns out I was able to get my badge, so after playing an upcoming game of Lighthouse Run, I went to the Exhibit Hall to help the Plaid Hat crew get the booth set up. 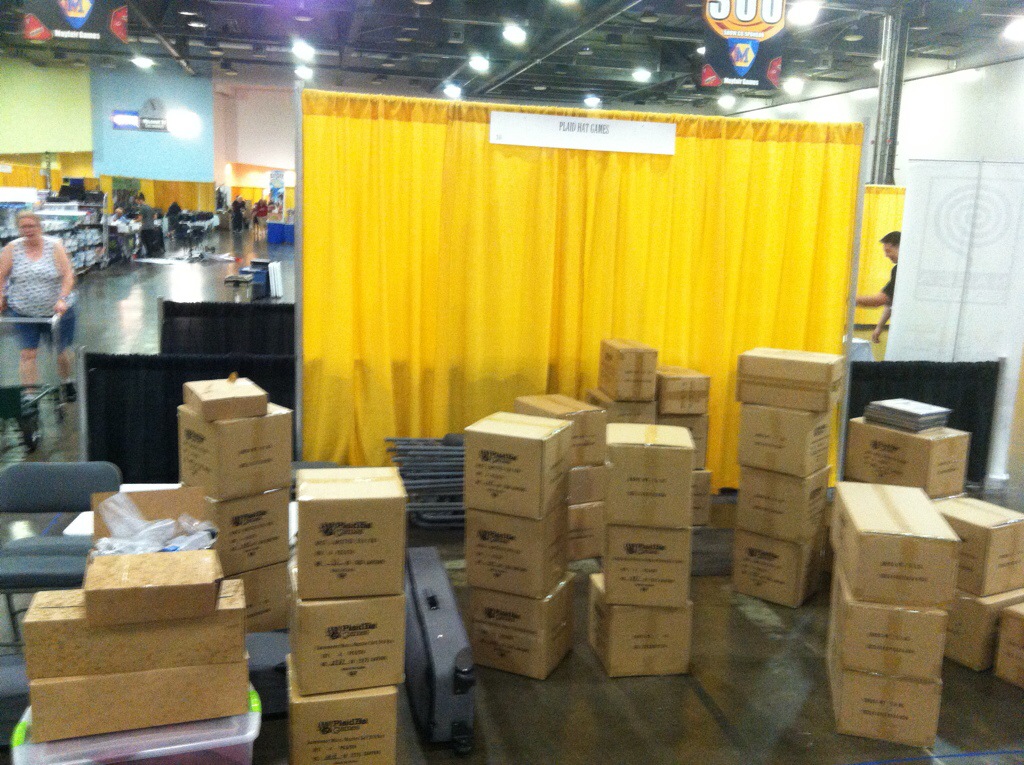 Colby, Alex and Isaac arrived a few minutes later, and Isaac and I put the booth together. We got it knocked out in about an hour and twenty minutes. Then I wandered around the hall watching other vendors get set up, and then returned to the board room, where I spent the rest of the day. 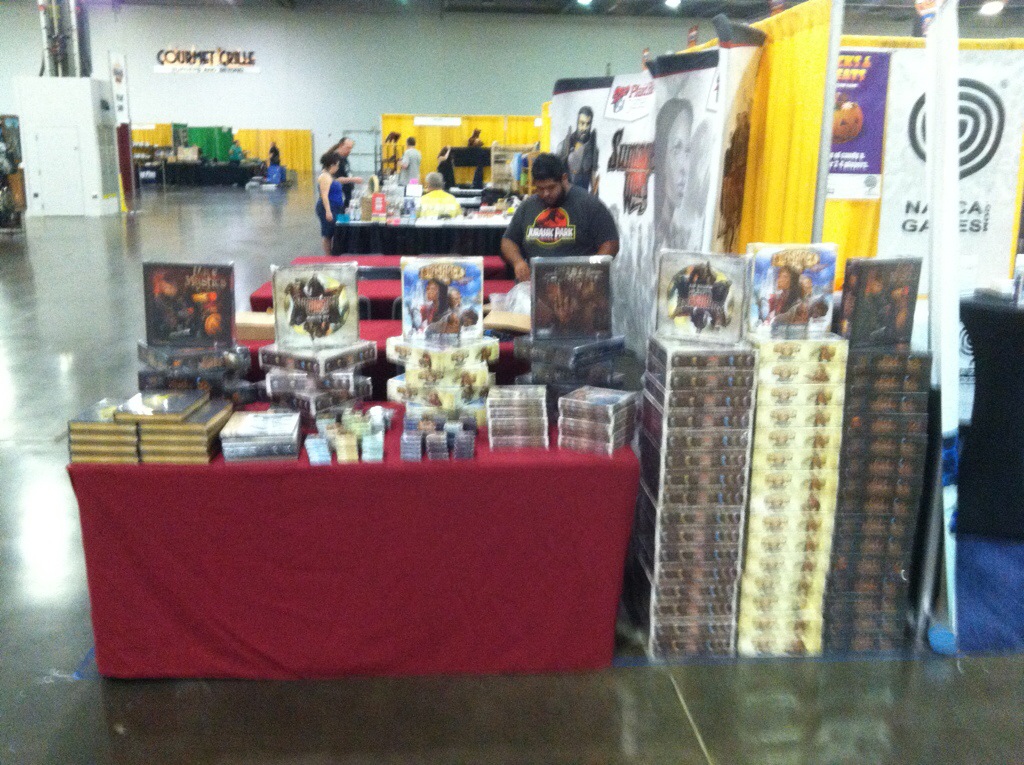 Before we left, Seth and I stopped to talk to the Secret Cabal guys for a bit, who thought it was pretty cool that there’s a house full of Secret Cabal fans at Origins this year.

The rest of the house members showed up throughout Wednesday, with the first showing up around 1:30 am, and the others arriving around 3pm. When we retired to the house for the night, we gathered all the games we brought, and took a few pictures. 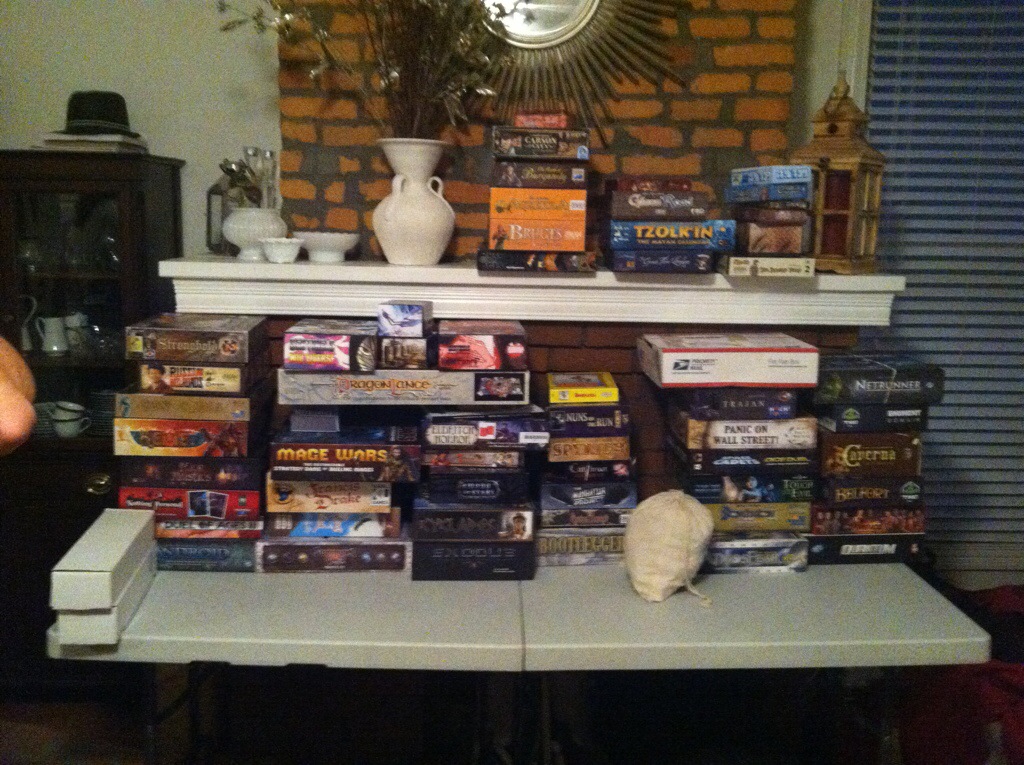 Who needs a convention?

Tomorrow, I’ll be spending the day demoing Mice and Mystics at the Plaid Hat Games booth. I’ll check in afterward.