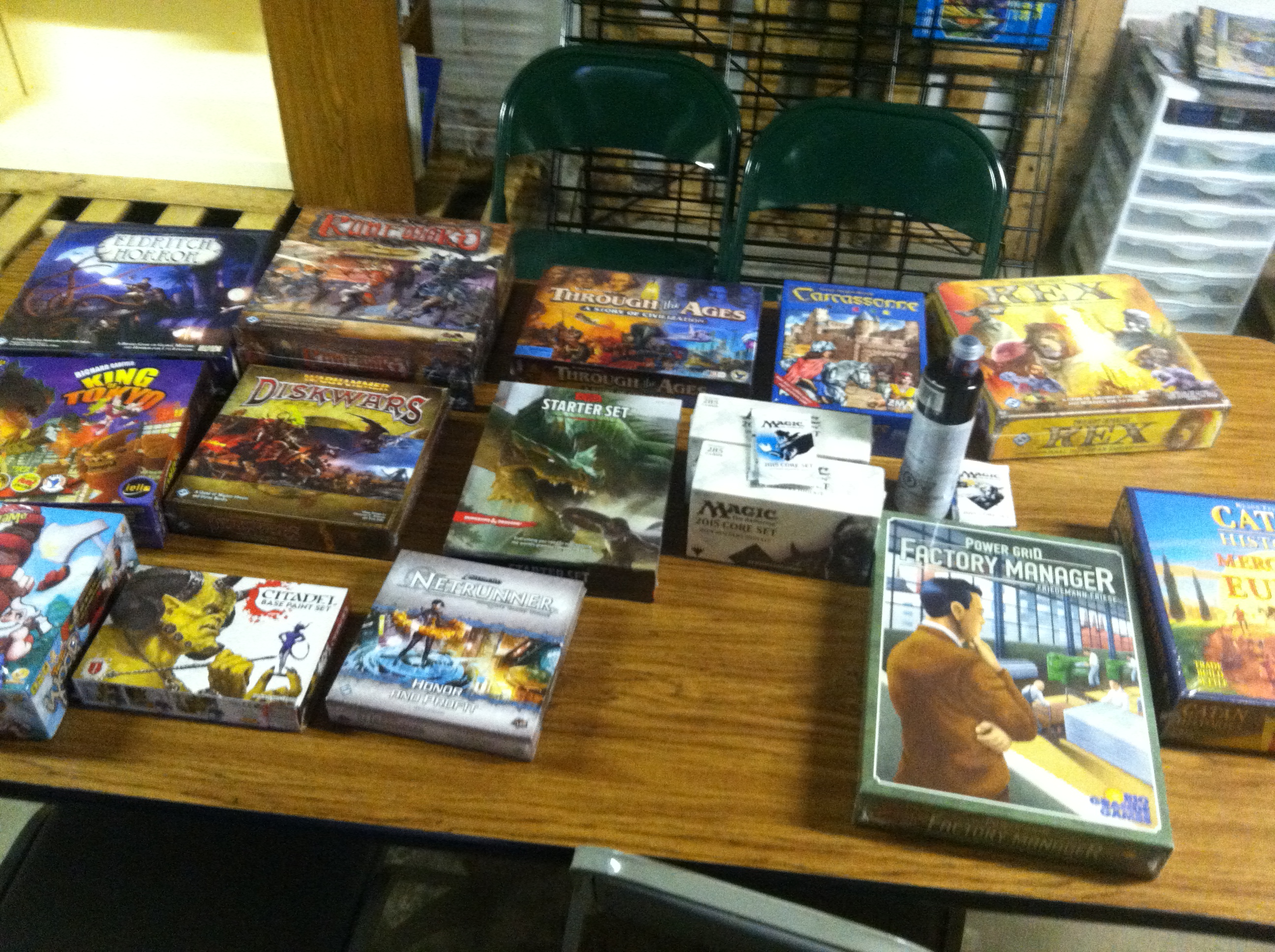 For the last year and a half, I’ve severely curtailed my board game collecting. Having a baby, moving across the state, maintaining a small house payment as well as rent, and not having as much time to game really make it a lot more difficult to *collect* games, let alone play them. There have been a few things that I’ve managed to keep up on, but the collection on a whole hasn’t grown very quickly. I only got a handful of things when I went to Origins, and a few of them were free (prizes or gifts).

My 40th birthday is coming up in a few days, and on the spur of the moment, I decided to treat myself, without spending any actual cash. I kept a binder of Magic: the Gathering cards when I downsized my collection last May, and one page of those cards, in particular, has held a decent amount of value. I took the binder to one of the local shops, and arranged a trade that let me have a small shopping spree, the likes of which I’ll probably not get to have again anytime soon. I thought I’d take a moment here to mention them all. I’ll start with the non board games.

Magic: the Gathering: Jamie and I have been talking about playing in limited events from time to time, and our cousin is planning one such event in the near future. I got 2 Deck Builder’s Toolkits and a few booster packs, to allow us to do that.

Paint: I picked up a can of primer (black), a Citadel Base Paint Set, and a single pot of a nice dark blue base paint.

Dungeons and Dragons: I picked up the new Fifth Edition starter set, as I’ve never been able to pass up a new edition of D&D. This has been true since 1989, and it’ll probably remain true for a long time. I know I’m in the minority, but I really liked 4th edition, so I’m interested to look more closely at 5th edition.

Carcassonne: When we moved away last year, I left behind several games for Legends to use as demo material. This was especially true of the “staple” games, such as Carcassonne, Settlers of Catan, Ticket to Ride, etc. We just figured we’d reacquire them as time would allow. I finally added Carcassonne (just the base game) back to the collection.

King of Tokyo: Another game left behind. This is one I’ve been wanting for the Wednesday gaming group. Good to have it back.

Toc Toc Woodman: The third such replacement game. I’m excited to have this one back, as I feel it will be one of the first games I’ll be able to play with my Daughter. Candyland notwithstanding.

Android: Netrunner: Honor and Profit: I’m falling behind on my Netrunner expansions, but I don’t like to miss the larger expansions, so this keeps me up to date at least on that front.

Eldritch Horror: I borrowed the game store’s demo copy of Eldritch Horror months ago, and hadn’t gotten a chance to return it. Having played it quite a bit, and I believe the only one to do so, I picked up a new copy, and gave it to them for their demo shelf, and kept the copy I’d been borrowing for 3 months. I also ordered the expansion, though I understand it’s out of stock.

Catan Histories: Merchants of Europe: I remember when this came out, and I don’t recall it getting quite as good reviews as Trails to Rails, but it still looks interesting, and I do like the Catan Histories games.

Rex: Final Days of an Empire: I know I can’t find a copy of Dune. I also like the Twilight Imperium universe. I’m looking forward to getting this to the table, though I have trouble finding the right group for a game with political intrigue (for example, I’m still trying to find the right group for Battlestar Galactica)

RuneWars: I’ve had Battlemist since it released in 1998. When I heard that Runewars was the spiritual successor to it, I resolved to get it. I managed to play it twice at Origins, though neither game finished, I enjoyed it both times. The copy I got is the Revised edition, that gets away from the FFG “Coffin” boxes. Which is somewhat a shame, and somewhat a good thing, since I only have so much shelf space left.

Warhammer: Diskwars: This one excites me. I used to demo DiskWars for FFG back in 2000 at conventions, and I was always sad that it had come to an end. I really like what I see with WH:DW, and look forward to playing it.

Power Grid: Factory Manager: I have never played Power Grid, and I know that many who like it don’t like that Factory Manager has the same name. But I’m the kinda guy who likes the Catan Histories games, so what do I know? Factory Manager looks like a pretty straightforward, fun game.

Through the Ages: This is the whole reason I set about this trade in the first place. I’ve been playing Through the Ages on BoardGameArena for the last few weeks, and I really love this game. I know the cardboard version is pretty fiddly, but damn I want to play it. I love the feel of the cards, I love the mechanisms for balancing population happiness, food consumption and resource management, and I love the multiple paths to victory. I can’t wait to play this game, and I think I know what I’m going to try to get Jeff to play when he comes to visit.

That’s it for now. So far, I’ve only gotten one of these games to the table, but I’m pretty sure I’ll be getting a few of them played soon! 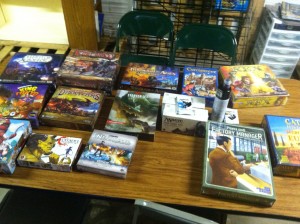