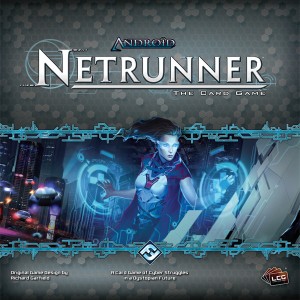 I owned a bit of Netrunner in the 90s, but I don’t think I ever played it.  We didn’t have much luck pushing any CCGs that weren’t Magic or Pokemon.  I have no idea what happened to my collection.

Even so, I was pretty excited when the LCG was announced.  I had only really barely started looking at the various Living Card Games from Fantasy Flight Games.  I had been traded a sizable collection of The Game of Thrones LCG from a friend, but hadn’t managed to wrap my head around it enough to get into it.  I’d always liked the William Gibson novels like Neuromancer and Burning Chrome, though, and the theme here really intrigued me.

The game is an asymmetrical two-player affair, where one side (The Corporation player) has a lot of hidden information in the form of “servers” which can have several things attached to them.  Some cards are defensive, some score points, and others give the corporation player advantages later in the game.  The other player (The Runner) has all of their assets visible, but will attack the Corporation’s various assets, and try to score points, and stop the opponent from getting the above-mentioned assets.

We managed to get into a demo of the game at GenCon, and I very much liked the theme.  The gameplay was a little hard to get into, as I don’t think the theme was really Jamie’s cup of tea.  I still liked it enough to want to pick up a copy, though, as I felt (and still do) that there IS someone who will enjoy playing this with me, from time to time.

I’ve only gotten it to the table once since then, and it wasn’t really Jeff’s cup of tea, either.  We’ve discovered that we like Game of Thrones and Warhammer Invasion more, so those are our go-to card games.  I love the idea of asymmetrical games, though, and intend to get this to the table again soon.  I’m hoping to get a small (or larger) LCG community built in our area, which may allow us to do a bi-weekly evening where various LCGs get some attention.