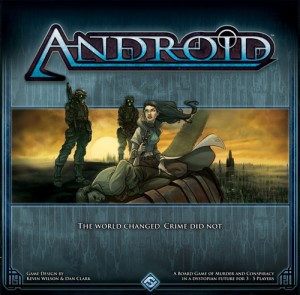 I heard about [bgt id=39339] shortly before they announced Android: Netrunner.  I was attracted to the future noir setting, and liked the idea of a murder mystery where the actual “solution” to the game isn’t predetermined.  It took quite a while to get it to the table, and sadly, I’ve only gotten to play it once.

In Android, you play one of several detectives set in a dystopian future.  You’re investigating a recent murder, but you have personal baggage to deal with as well.  Each character has its own flavor, its own personal quests, and its own way of dealing with the investigation.  Each player is also given two suspect cards.  One is the suspect that they are trying to prove is guilty, and one they’re trying to prove is innocent.  As you find evidence, you may choose which suspect it applies to, and if it’s incriminating or exonerating evidence.  As the game progresses, you will draw cards that will either further your own quests, or hinder your opponents progress and quests.  Each character has a balance “light and dark” that affects what types of cards you can play.

The game has a fairly high learning curve and there are a lot of bits and tokens to keep track of.  Our first play was a bit rocky, but I enjoyed it quite a bit.  I’m not sure Jeff and Allen enjoyed it quite as much, but I would certainly like to play it again. Hopefully, I can get this to the table again.

I very much enjoyed the setting of Android, and like it equally well in the Netrunner game.  I hope to play Infiltration soon, and also would like to pick up some of the novels.